Black holes are cosmic vacuum cleaners — massive objects so large that not even light can escape them.

Most people imagine black holes do nothing but sit there and devour wandering pieces of gas or dust.

But could black holes actually have more interesting interior lives? Could they, for instance, explode? If an “explosion” is “a sudden, brief release of tremendous amounts of energy” then the answer is unequivocal yes. And the best part is that they can explode in several interesting ways, either by detonating themselves or their nearby environments.

There is one way in which black holes can explode. The process behind this is related to the fact that black holes aren’t entirely black, which was discovered by famed astrophysicist Stephen Hawking in 1976.

“In classical physics, nothing can come out of the hole,” Samir Mathur, a physicist at The Ohio State University, told Live Science in an email. “But Hawking found that with quantum mechanics, the hole slowly leaks away its energy to infinity by emitting low energy radiation; this is called Hawking radiation.”

As long as a black hole isn’t sucking in new material, it will slowly lose mass as it emits Hawking radiation. However, Hawking radiation is emitted slowly. A normal black hole with a mass a few times that of the sun emits approximately one photon, or packet of light, every year. At that rate, the typical black hole would take 10^100 years to completely evaporate.

But Hawking realized that smaller black holes evaporate much more quickly. As a black hole gets smaller and smaller, it emits more and more radiation. In the last moments of its life, the black hole emits so much radiation, so quickly that it effectively acts like a bomb, releasing a torrent of high-energy radiation and particles.

If small black holes (about the size of Earth) formed in the extremely early universe, they would take a few billion years to evaporate, meaning that these “primordial” black holes, if they exist, would be exploding all over the universe right now.

To date, astronomers have not found any evidence of exploding primordial black holes, but they could be out there.

Black holes go bang with another type of explosion found nowhere else in the universe, thanks to the fact that they spin. Rotating black holes — also named Kerr black holes in honor of New Zealand mathematician Roy Kerr, who first figured out how they work — create an ergosphere around their event horizons. An ergosphere is an elongated region of space where nothing can stay still. Anything that falls toward the spinning black hole begins to orbit around it as the particle enters the ergosphere.

The rotating space-time around a black hole can also pull on photons. If there are enough photons, they can bounce off of each other or any wandering particles. Sometimes the bouncing causes the photons to escape the ergosphere. But other times the bouncing causes the photons to fall deeper towards the black hole, where they gain energy. They can then get scattered to a higher orbit again, then fall back down.

With every repeat of the process and every trip around the black hole, the photon gains energy. This process is called “superradiance.” If the photon finally breaks free, it will have an enormous amount of energy compared with when it first started its journey.

If enough photons participate in the process, they can all come bursting out at once with incredible energy, becoming what’s known as a “black hole bomb.” Even though the black hole itself doesn’t explode, this superradiant effect once again shows just how powerfully black holes can affect their environment. 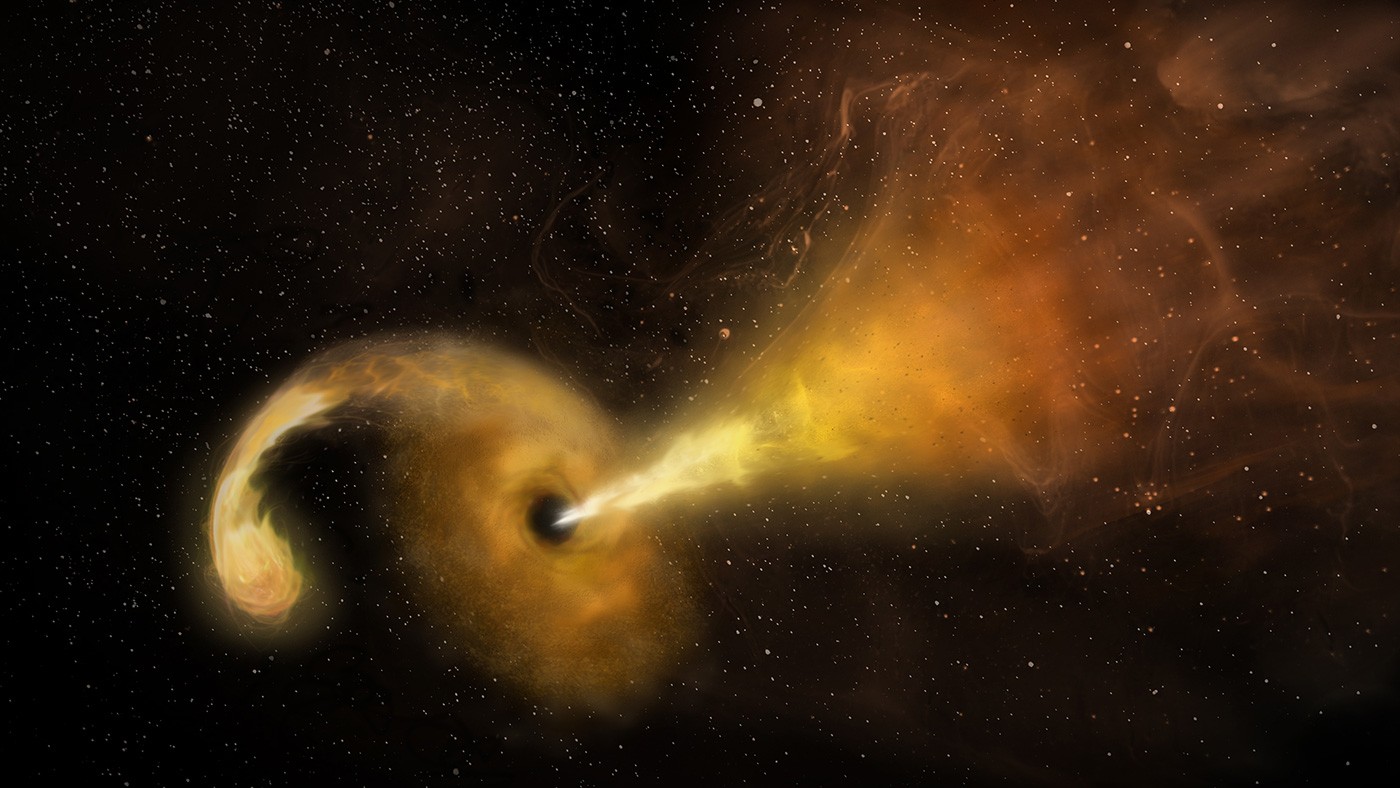 The most common way that black holes cause explosions is not through their own self-destruction but through the sheer power of their overwhelming gravitational force. Supermassive black holes sit in the centers of galaxies, and sometimes large clumps of matter, such as stars, pass too close. When that happens, the star gets torn to shreds from tidal effects, and this tearing process releases an explosive burst of energy. Astronomers on Earth can witness this release of energy as a brief but intense flare of X-ray and gamma-ray radiation.

Besides shredding up stars, these giant black holes frequently collect swarms of matter that constantly swirl around them in giant accretion disks. The accretion disks reach temperatures of quadrillions of degrees, making them the brightest objects in the universe — a single glowing disk can outshine over a million galaxies at once.

At their most powerful, the disks wind up electric and magnetic fields that funnel some of the disk material around the black holes and out in the form of long, thin jets that reach tens of thousands of light-years.

Can a black hole explode?

Black holes are cosmic vacuum cleaners — massive objects so large that not even light can escape them. Most people

Dogs: History, evolution and behavior of our best friends

5 Tips to Speed Up Your Android Phone: 2022 Update

How to blur your background in FaceTime calls